Under Pressure To Get A House Sold? 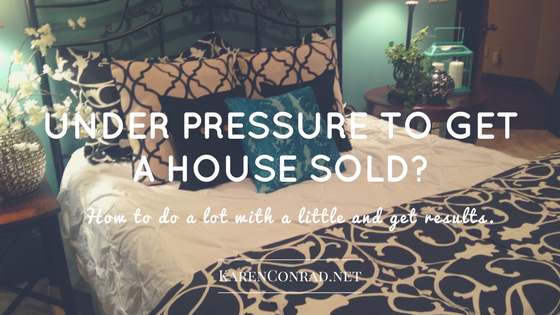 Under Pressure To Get A House Sold?

I received a call from one of the real estate agents that I work with, and I could tell that she had a problem on her hands with one of her listings, and needed help from me fast. The home had been on the market for over 90 days, and there was no interest for several reasons.

There were several large dogs in the home, which means dog hair, but the homeowner’s mid-moving state was more than what potential buyers could see past.

The agent was faced with a stressful situation with this home: the sellers had found a house they wanted to buy but could not swing both homes, so they signed a contingent offer on the new home. In the meantime, there was interest from another buyer on that home and all at once the agent was faced with having to sell their existing home in 2 weeks or they would lose the new home. With 90 days on the market and no offers, it was time to make something happen!

I went over to the home, and was faced with some real staging challenges. The home was a multi-lev¬el, and the entrance oddly came into the lower level where they was a mish mash of furniture and items half boxed up, a purple wall, and two spare bedrooms right in front of the entrance. Up a half a flight of stairs was the kitchen, dining and living area that was dark, with a sort of odd floor plan to boot. Up another half a flight was the master suite with no doors for privacy, and the bed was right in front of the wide door opening.

If there was an opportunity to be a little overwhelmed as a home stager, this was it!

Not only was the house oddly laid out, the dogs continued to shed, and I had 2 weeks to not only stage the home, but help get a contract in place.

I had little time to stage this home, and little budget to work with. I had to choose my strategy carefully. Here are 3 of the areas I focused on:

As you can see, the things I did in these rooms took very little time, and very little money!

The results? I got the home staged, it went under contract within days, and the homeowner is happily in their new home!

With 2 weeks to sell the home after being on the market for over 90 days with no interest or offers, it sold in a matter of days, allowing the homeown¬er to move to their new place, and the agent to have a nice sale on a property that looked impossible.
For more articles like this follow Karen on facebook, linked in, and twitter or go to KarenConrad.Net.